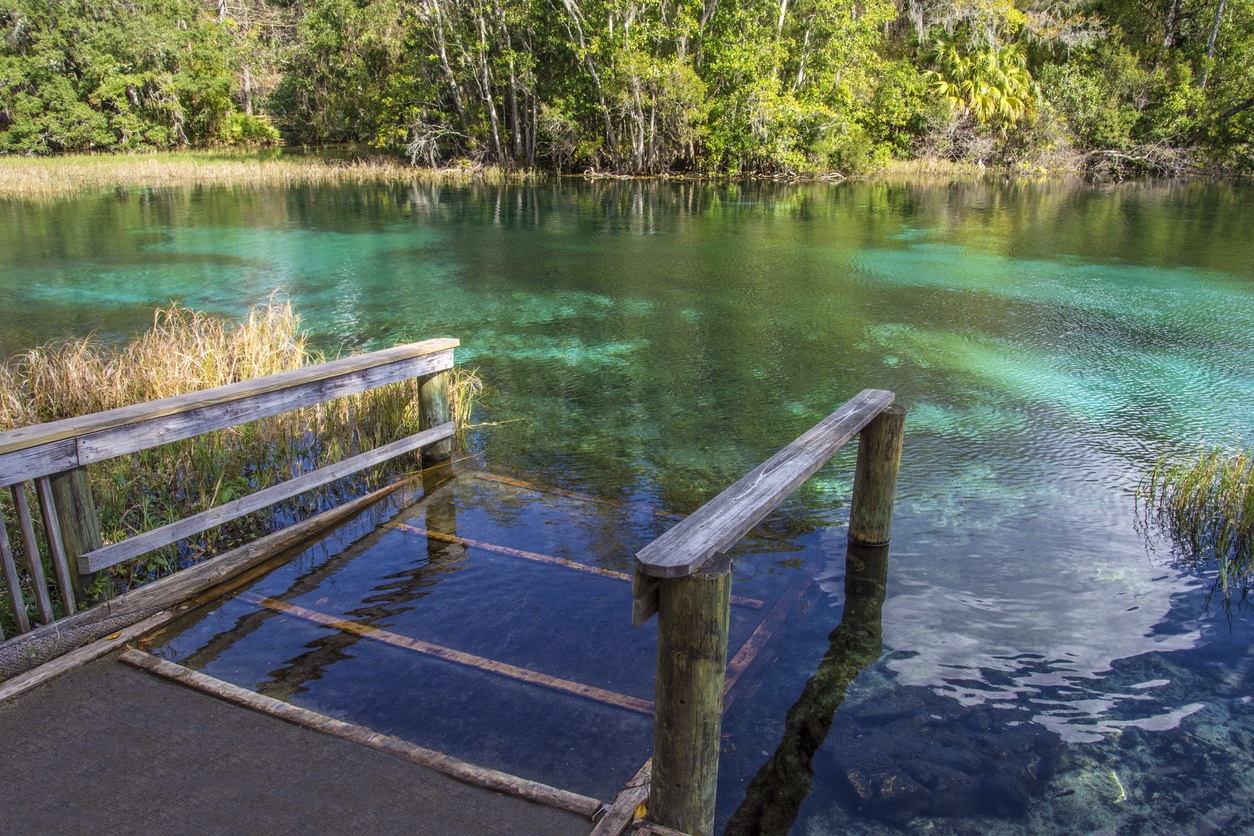 National Parks get all the love. And with gems like the Grand Canyon and Yellowstone, it’s easy to understand why. But when you’re planning an RV trip, don’t overlook the hundreds of incredible state parks across the United States. There are some you probably already know are classics to visit, like the Redwoods in California or Chimney Rock in North Carolina. There are plenty of state parks that don’t get their fair due though, and we are here to fix that. Here are some of the most underrated state parks in America. 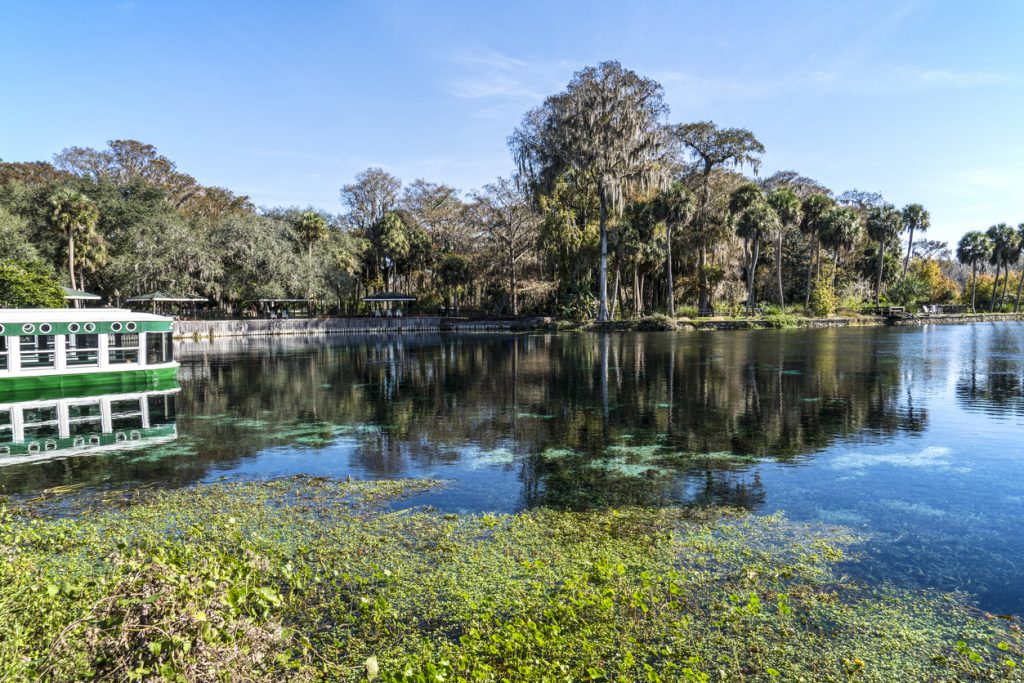 This gem is found in the same Florida city RVUSA calls home. We had to include it on our list. The crystal clear springs have been a frequented natural attraction since the 1870s. So popular in fact, that movies like the original Tarzan and The Creature From the Black Lagoon were filmed here. An amusement park was even built around the springs at one point. Docks were placed atop the headspring where visitors could climb aboard glass-bottomed boats. And take a ride around its aqua-colored waters where you can see straight to the bottom.

Eventually, the amusement park shuttered, but the attraction was so valuable to the area that Florida adopted it as a state park. Today, you can still ride the famous glass-bottomed boats, as well as kayak and paddleboard the springs and the adjoining river. On your ride through the area, you can spot artifacts on the riverbed, like statues left behind from a movie set and a Native American dugout canoe. Keep an eye on the riverbanks too – you’re likely to see abundant wildlife, like sunning alligators, turtles, and birds, as well as monkeys that now inhabit the forest after being set free there when the Tarzan movie was filmed. 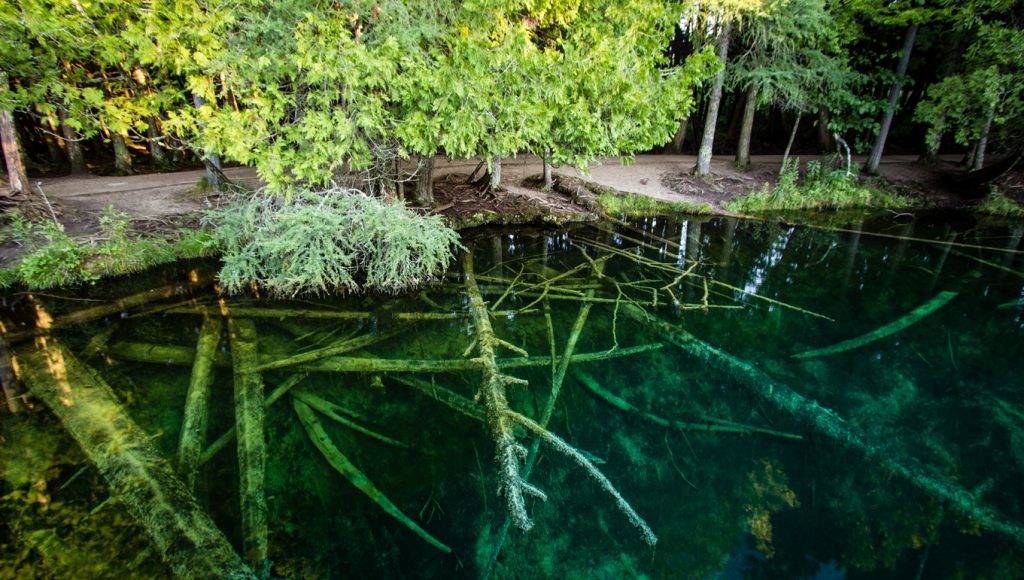 Speaking of springs, this state park in the Upper Peninsula of Michigan is home to one of the most breathtaking springs out there. The “Big Spring” in Palms Book State Park is called Kitch-iti-kipi and it gushes over 10,000 gallons of water a minute into the turquoise blue water. Trees from the surrounding forest have fallen into the water and become encrusted by limestone, creating a sort of underwater artwork for visitors to observe. The best way to see the spring is on the floating observation raft that drifts in the middle of the spring. The Upper Peninsula’s natural beauty is underrated in general, and if you’re making a trip there you won’t want to leave off this unique sight. 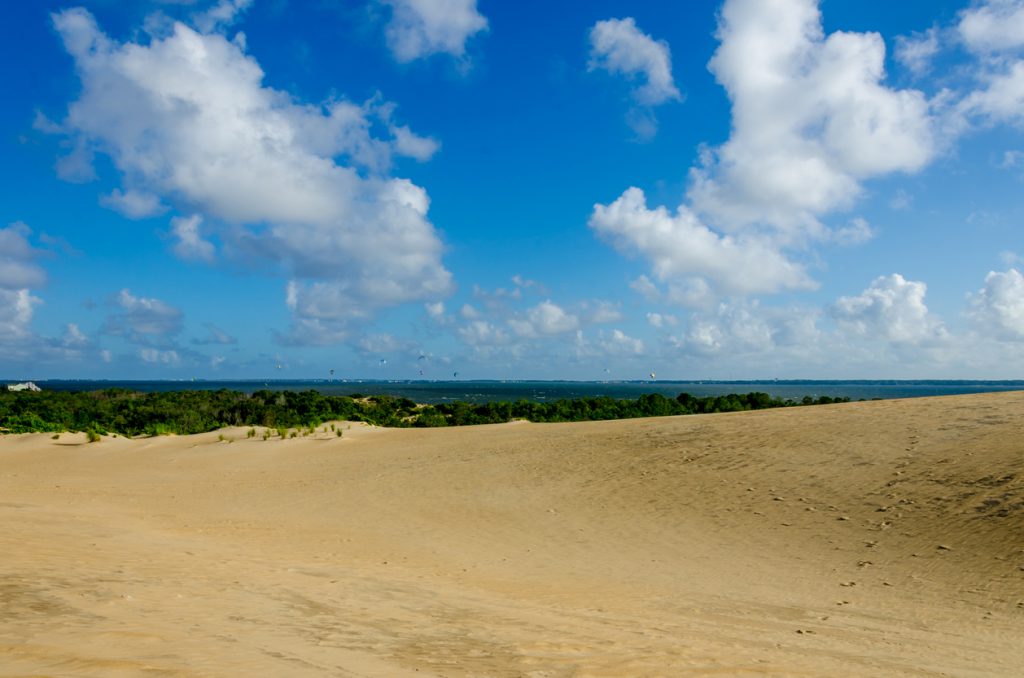 Photos don’t do these massive sand dunes justice. Located on the barrier island Outer Banks of North Carolina. It was rolling dunes like these that drew the Wright brothers to launch the first airplane in this area just a few miles down the road. While those historical dunes are now covered in grass and serve as a national memorial. These sandy hills remain preserved in their natural state. Climbing Jockey’s Ridge may look easy, but they stretch on a lot further than you may think.

From the top of the dunes, you can see the Atlantic Ocean on one side, and the Albemarle Sound on the other. Taking a hang gliding lesson from nearby Kitty Hawk Kites on the dunes is a must. But if you aren’t feeling quite so adventurous the dunes are great for flying regular kites and watching sunsets. Of course, the sand moves with the wind, so if you catch it at the right time, you might see a peek of the giant sandcastle that used to be part of an old putt-putt course that the dunes have since overtaken. 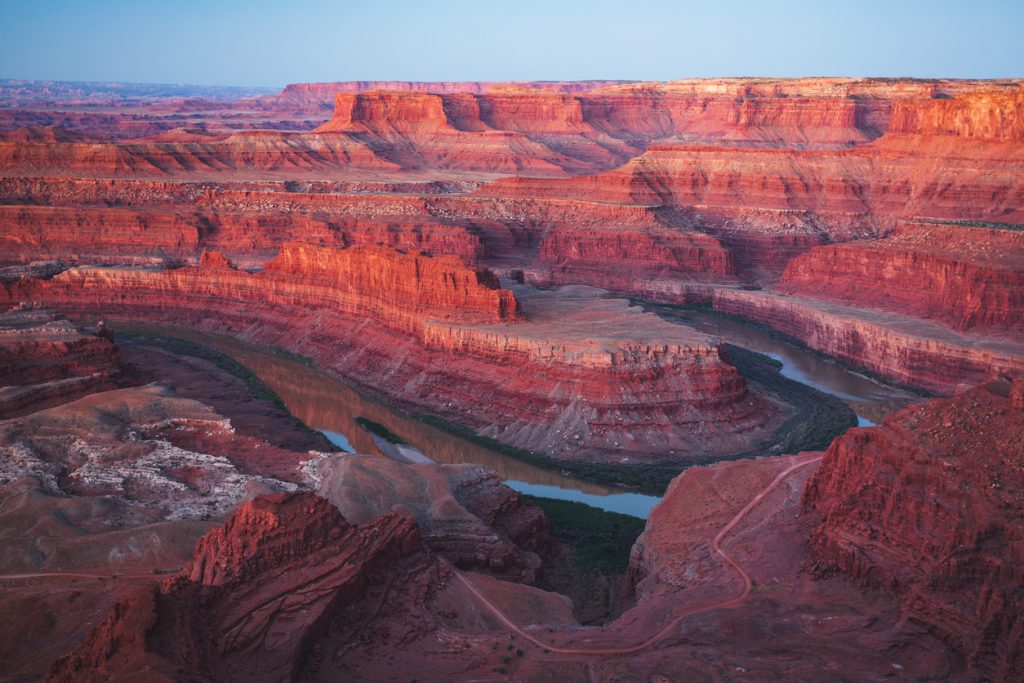 Utah is filled with national parks and monuments that belong on bucket lists.  Zion, Bryce Canyon, Arches – the list goes on. With that in mind, it’s easy to understand why its state parks sometimes get looked over. But Dead Horse Point State Park is one you do not want to skip. One glance at a photo and you might mistake it for the Grand Canyon. It, too, is carved by the Colorado River and serves up breathtaking views. Legend has it that turn-of-the-century cowboys would chase wild mustangs up the narrow neck of land and onto the mesa point overlooking the gooseneck in the river below. Regardless of the history, it’s a view you’ll want to see. 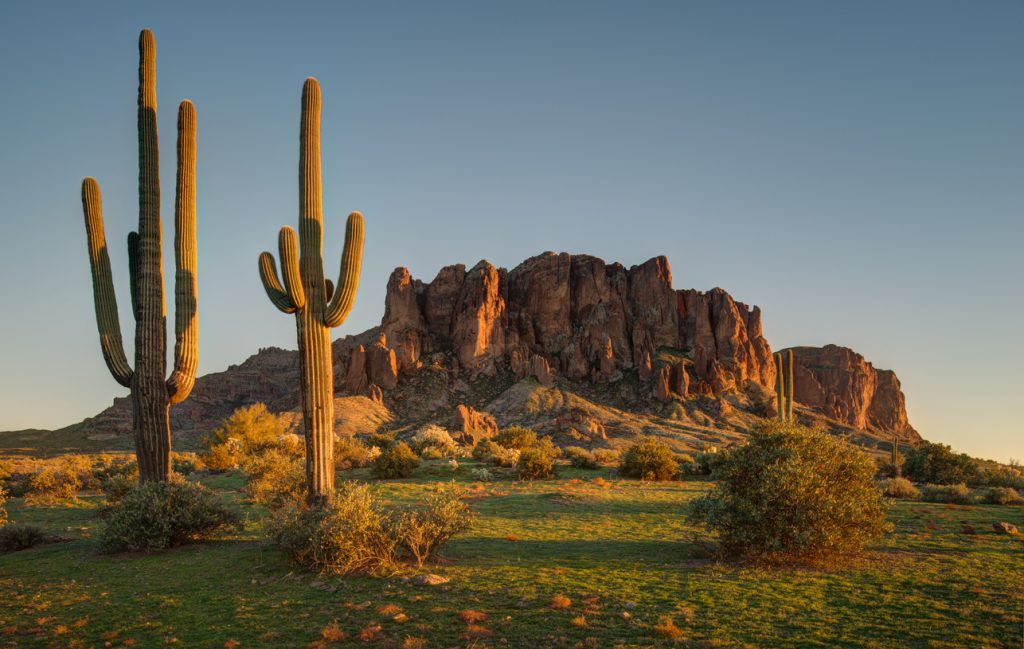 The same national park overload can be said about Arizona. And that’s a compliment to the Grand Canyon State! With so many parks and monuments to see, it’s hard to mark them all off the list. This state park east of Phoenix is one that might not make it on national must-visit lists. But it’s a favorite among locals. Legends are plenty in this park as well – supposedly there is a lost gold mine somewhere on the premises. The “Dutchman,” a German miner, left a clue on his deathbed to where the alleged mine was. But it has yet to be discovered. That hasn’t stopped visitors from coming to explore the park’s trails and vistas in and around the Superstition Mountains. If you’re feeling up for a challenge, hike the 6-mile out-and-back Siphon Draw Trail to the top of the Flatiron. 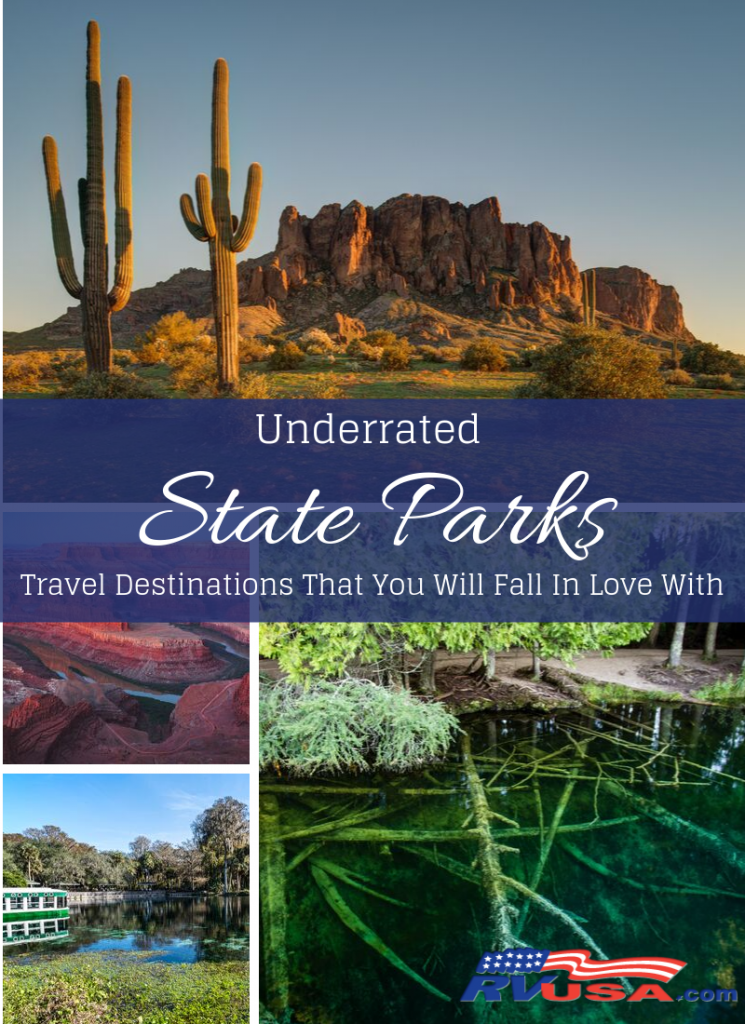 This list could go on forever, as each state has hidden gems just waiting to be discovered. The best way to find them is to ask the locals when you travel. Or make friends with other RVers who frequent the area. Chances are there’s an amazing place to see that you haven’t quite heard of yet.

There’s something to be said for huddling around a campfire with your closest friends and family while snacking on s’mores, chili, and hot chocolate. When the colder months are...