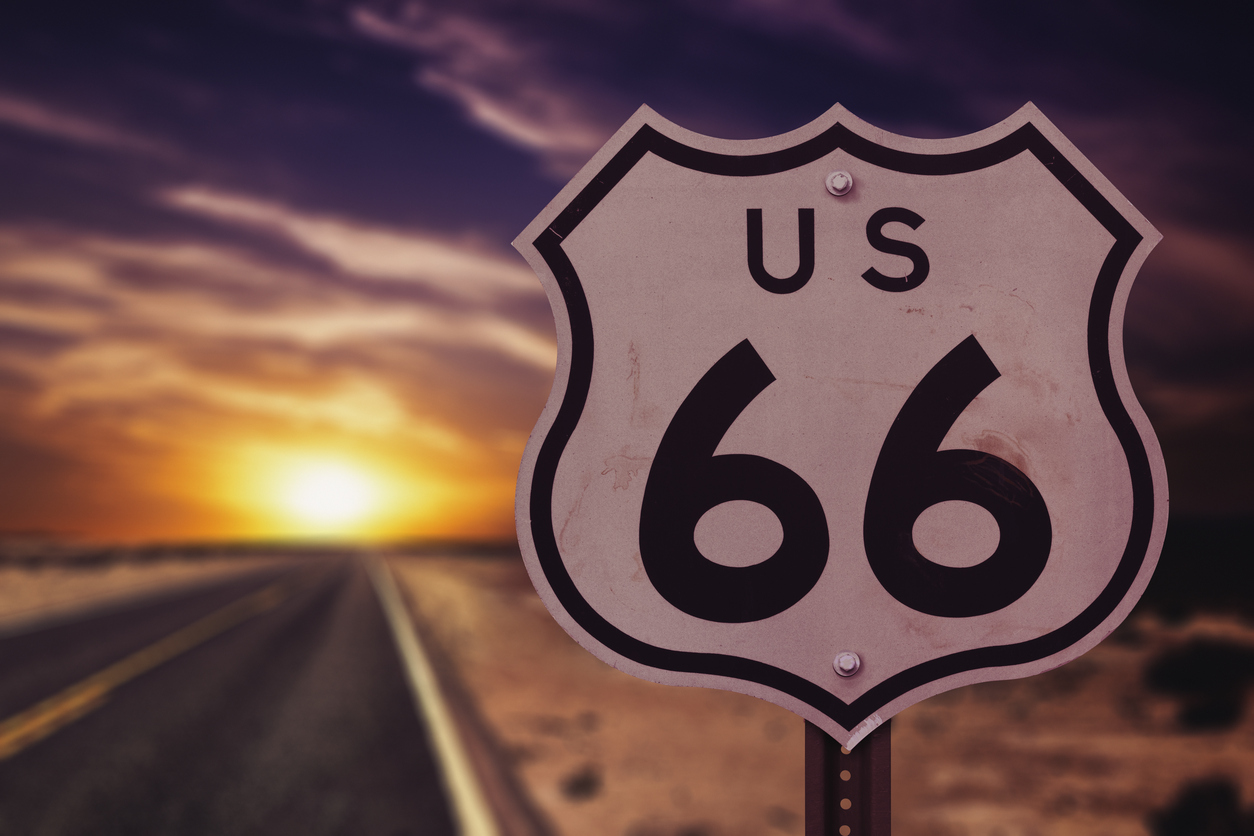 Since its construction in 1926, Route 66 has been the source of fun for travelers, passersby, dreamers and explorers. Also known as the Will Rogers Highway, the Main Street of America or the Mother Road, was one of the first highways that was part of the U.S. Highway System. About a year after its establishment, road signs began to pop up alongside the highway.

Though the original road was 2,451 miles long, it no longer exists on today’s maps since the highway was decommissioned. In certain parts, the actual road is no longer paved and basically impassable. Alas, travelers can still ride down some of the original road in a car.

So what’s so spectacular about the highway? Well, to put it simply, some like to think it symbolizes change in America. Two businessmen came together and imagined a “superhighway” of sorts that connected Chicago to Los Angeles. During their time, they envisioned the highway bringing industry from the East to the West, but that wasn’t all. Its purpose was to also give small towns access to major roads and to connect main streets of different communities. Eventually, Route 66 couldn’t handle its own traffic and many highway planners began to come up with more direct routes between cities. In 1985, Route 66 officially lost its United States Highway designation.

It certainly doesn’t look like it used to, but there are still places along the old highway that tourists can visit. We’ve found some throwback spots along the way for you to visit! 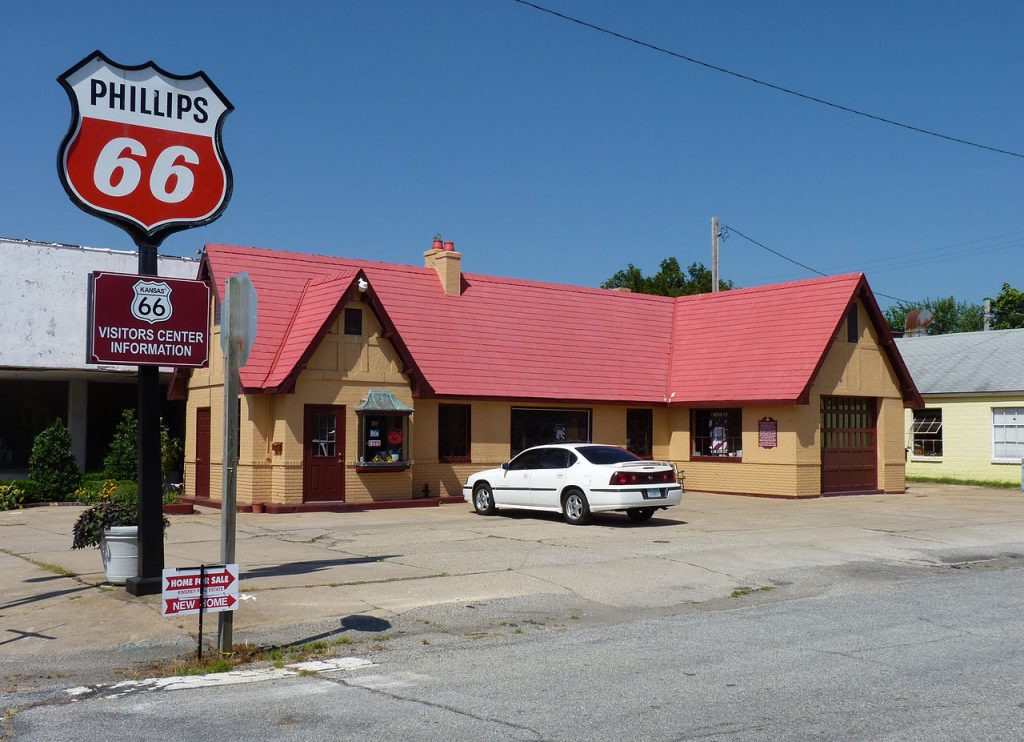 For all the auto mechanics or car enthusiasts out there, this old time gas station will surely give you the nostalgia feeling. The stock market crash in 1928 left oil companies in great peril. so, they began to pop up small uniform stations to immediately identify their brand. The small, homey-ness of each station was to give drivers a sense of security during a time where nothing was certain. 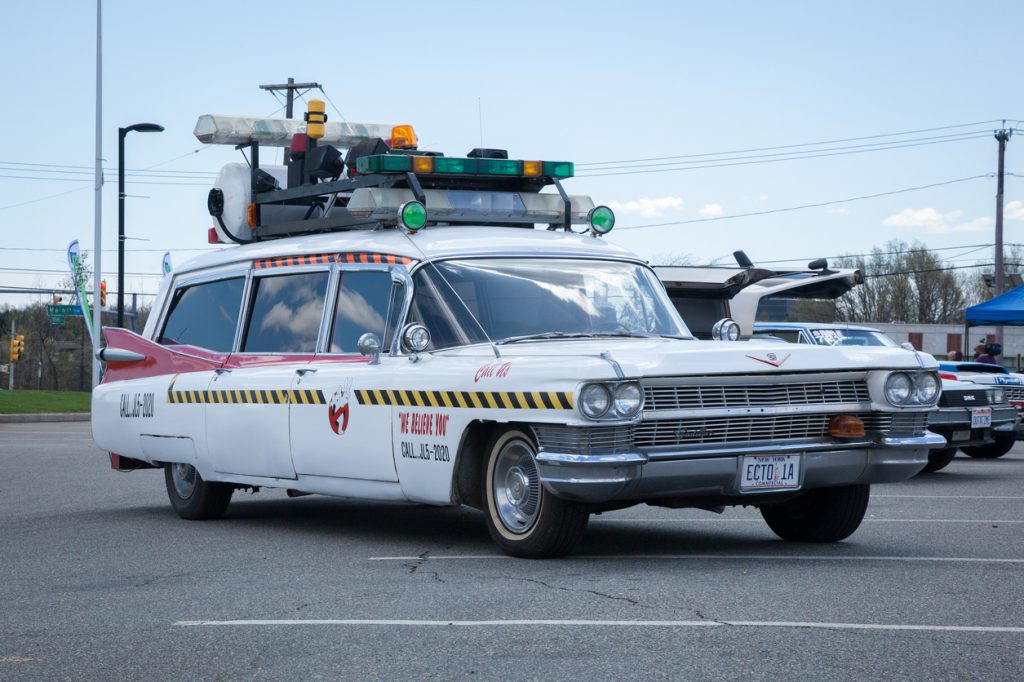 To continue with the car theme, another throwback attraction along Route 66 is the 66 Car Museum in Springfield, Missouri. This place has it all, ranging from the 1907 REO Runabout all the way to the 2005 Morgan Aero 8 Convertible. Guy Mace started his collection in 1990 with his Jaguar. It quickly grew to about 70 vehicles! 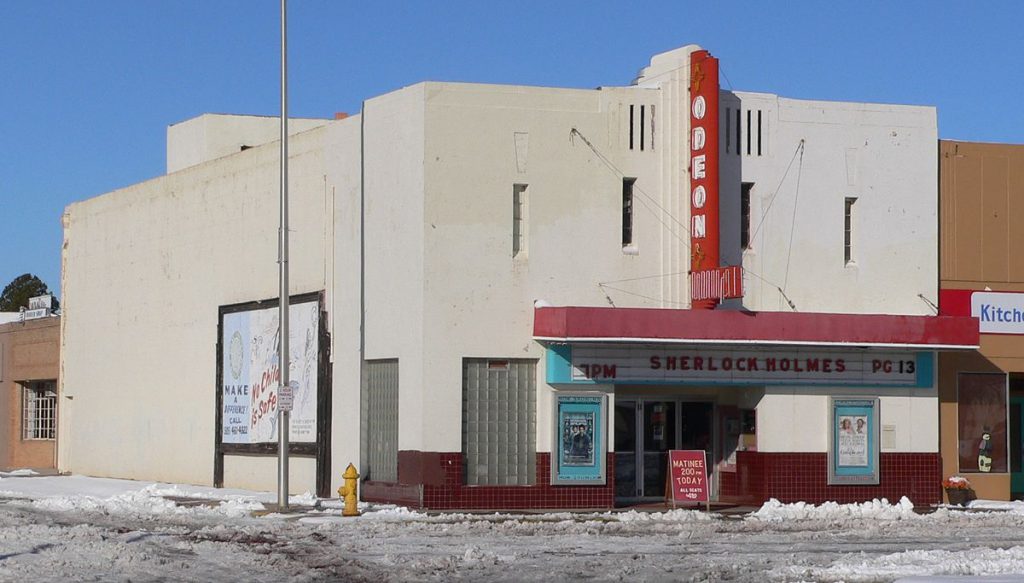 This small movie theater is a very distinctive art deco building. This two-story landmark is built with stucco-faced clay tile walls on concrete. The outside might not be impressive, but its retro feel is what most people go for. And the movie prices aren’t too shabby, either! The theater only has one screen, but it comes with a great snack bar and all around unique movie-watching experience. It was put on the National Register of Historic Places in 2007.

Standing in the perfect swing stance for a baseball player, the Mickey Mantle Statue depicts the Hall-of-Famer as he takes a swing. The star of the New York Yankees during the 1950s and 60s once played for the Commerce High School, which is where the statue stands. Unfortunately, Mantle died in 1995 and never saw the statue, nor did the designer of the statue, Nick Calcagno. There is another nearly identical statue in South Oklahoma City, but the one in Commerce shows the switch-hitting baseball player, while the one in Oklahoma City shows him swinging left.

The Arcade Heroes was started by an arcade game enthusiast who wanted to share the video game realm with the rest of the world. Though you’ve probably been to many an arcade, this one might surprise you with its uniqueness. Whereas many arcades only like to have modern games like Guitar Hero and Mario Kart, Arcade Heroes claims to want any kind of video game that’s out there. Their newest release is their Alice Cooper’s Nightmare castle, a themed pinball machine. 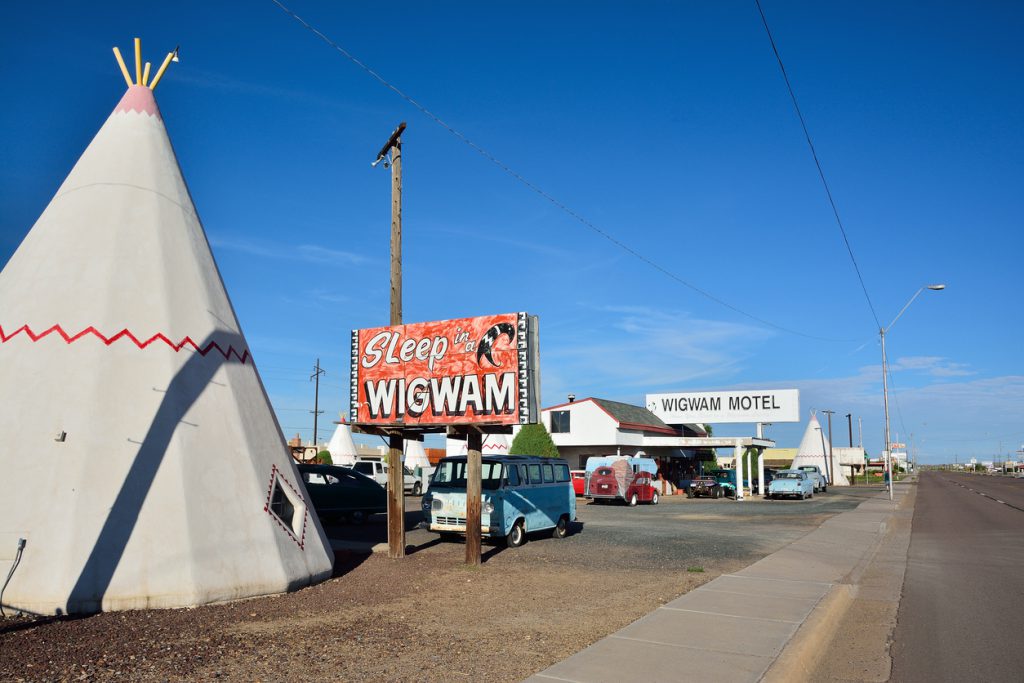 Built in the 1930s and 40s, these teepee-shaped motel rooms are definitely a one of a kind experience! Though they aren’t too flashy on the outside, it’s the experience that people stay for. If you’re traveling on Route 66 for any reason, stay in a wigwam and mark it off your bucket list!

This museum is home to 2,000 square foot motorcycle and Route 66 gift shop and has an extensive collection of motorcycles and memorabilia. Recently, the museum has expanded their Evel Knievel collection that includes Evel’s Snake River Canyon Jump Mission Control Super Van. Hungry? Don’t forget to make arrangements for lunch here. 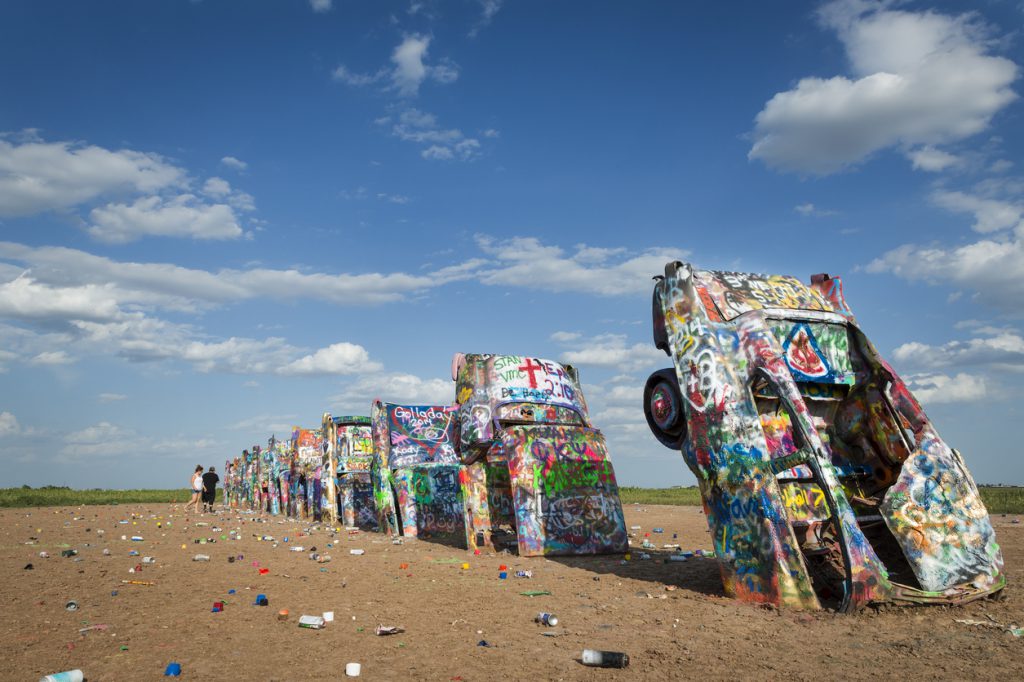 Oddly enough, Cadillac Ranch was built by a group of artsy hippies that made their way to Texas from San Francisco. This group decided to half bury 10 Cadillacs nose-down deep into the rich Texas soil. Passersby and travelers began to leave their mark with spray painted graffiti. This was first frowned upon, but now it is most encouraged. Don’t be afraid to let your inner artist free and spray to your heart’s content. Bring all your favorite colors! 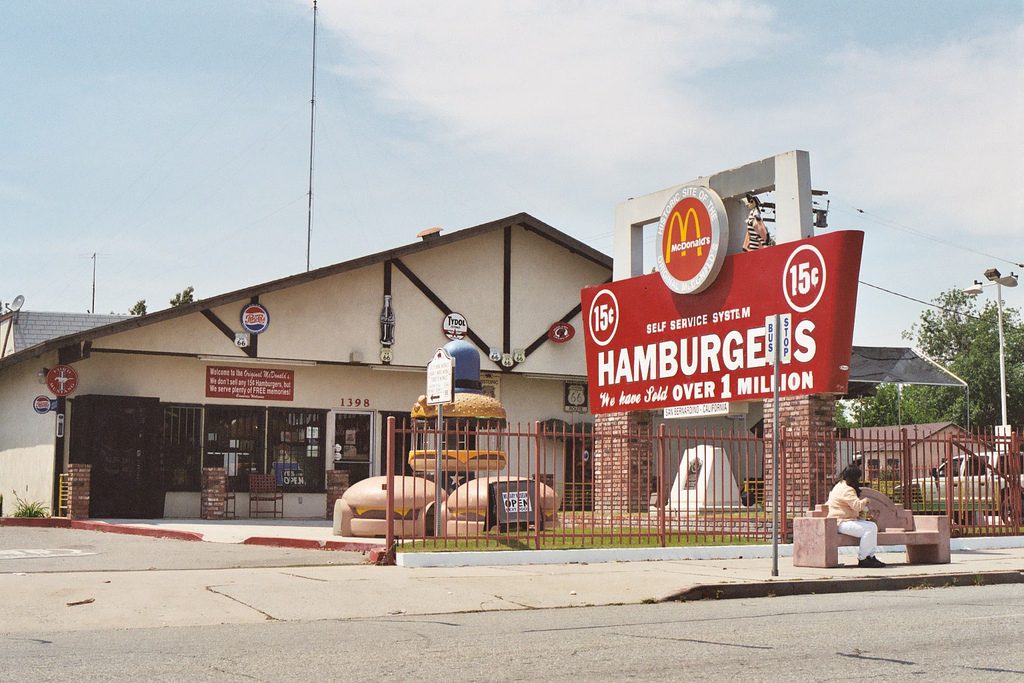 The original McDonalds was built in 1940 and had a small staff of 20 carhops and only a 25 item menu that included barbecue items, like ribs, beef and pork sandwiches. Later on in 1948, the two McDonald brothers forever changed the fast food realm by replacing their menu items with burgers, fries and milkshakes.

The site is now a museum full of McDonalds memorabilia like news articles, menus, straws, cups and old photos. The outside of the place is just as neat as the inside! Once you pull in, you’ll see a huge sign from the old McDonalds and a few Ronald Statues and Route 66 plaques. Who knew the fast food industry had such a fascinating beginning?

Though the museum building itself is newer, the memorabilia and artifacts range from all the way back to 1917. The American conflicts that the museum depicts are World War l, World War ll, Korean War, Vietnam War, and the post Cold War operations. To see just how much combat has evolved over the decades, they have old and new uniforms, badges, and weapons on display. They also have models that compare new and old technologies, such as the submarine.

Can’t make it to Illinois any time soon? No worries! You can subscribe to their YouTube channel to stay updated on their newest additions to the exhibits.