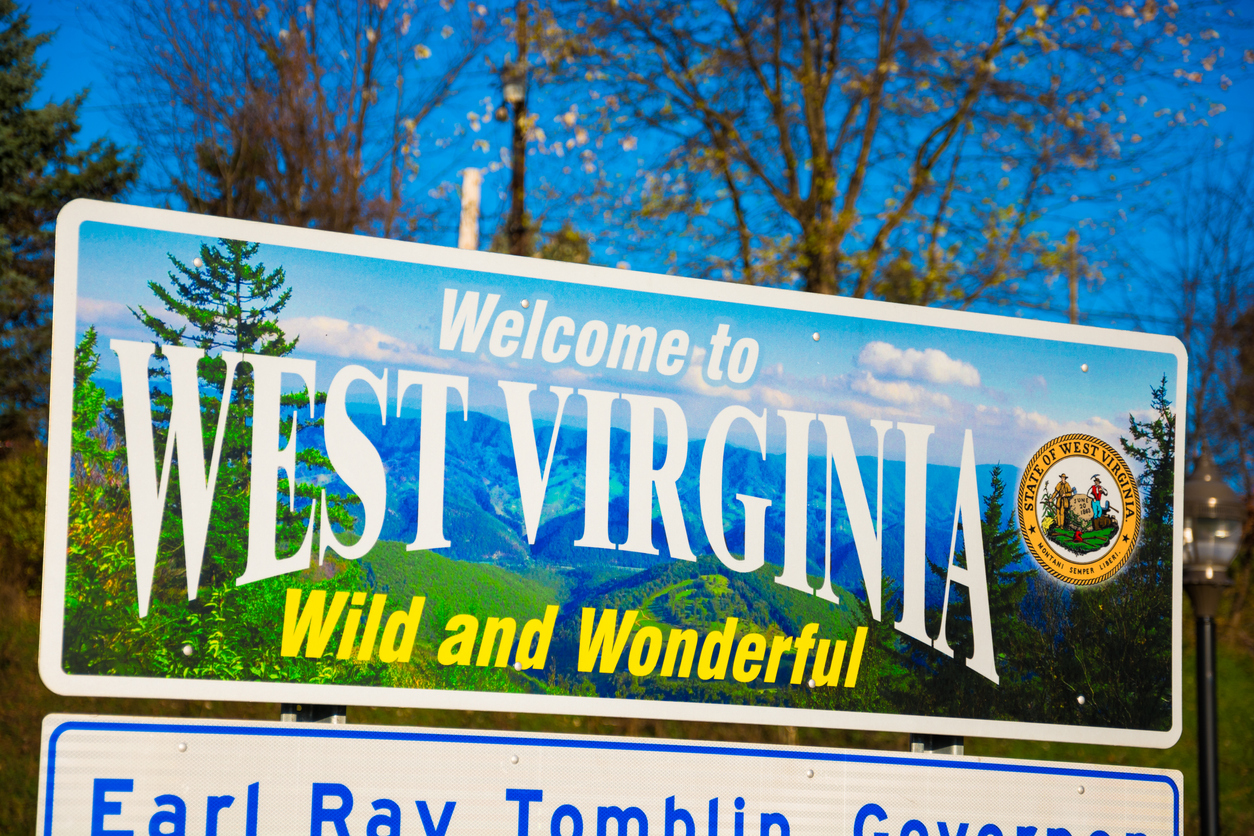 West Virginia is home to some rather neat and unique attractions. Love a good ghost hunt? Check out West Virginia. What about breathtaking views of black water waterfalls? West Virginia has them. The point is that you won’t have to travel far once you’re in the state to keep you and your family busy for your vacation. Keep reading for the rest of the amazing, off the beaten path destinations we found! 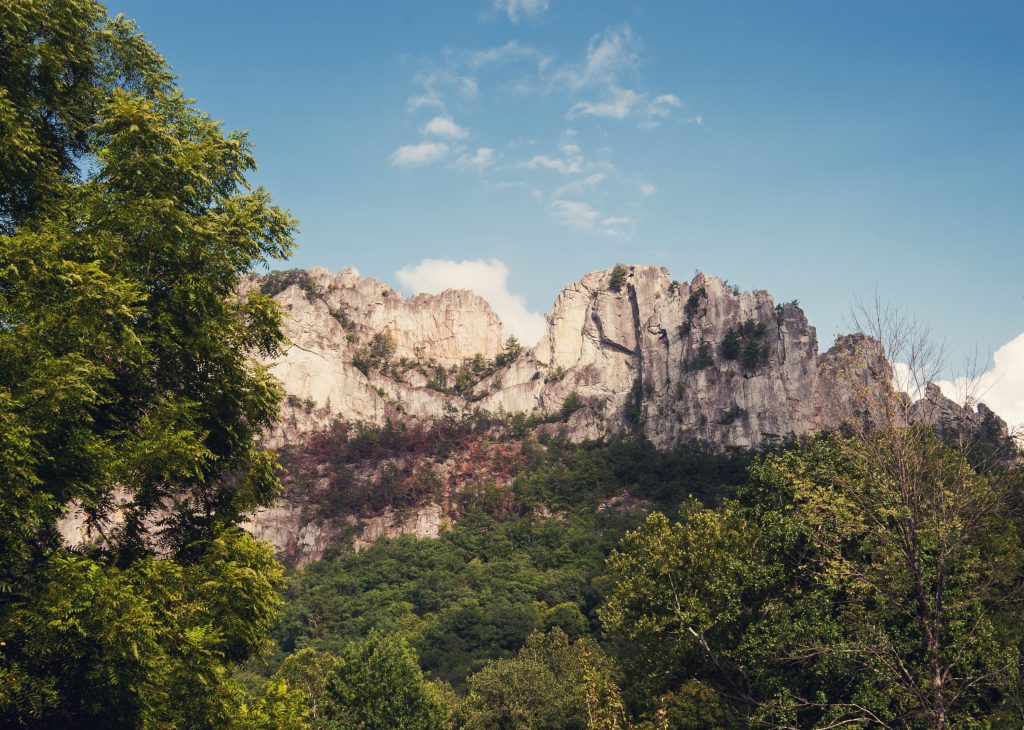 A view of Seneca Rocks in West Virginia, a popular spot for hiking and climbing.

Seneca Rocks, located in Monongahela National Forest, is one of the most well known landmarks in all of West Virginia and have been noted as a scenic attraction for rock climbers across the country. The rocks are an amazing formation rising to almost 900 feet above the North Folk River. A self-guided 1.3 mile trail begins behind the Seneca Rocks Discovery Center. It offers those who don’t climb a way to reach the heights of the rocks and to view the breathtaking valley below. 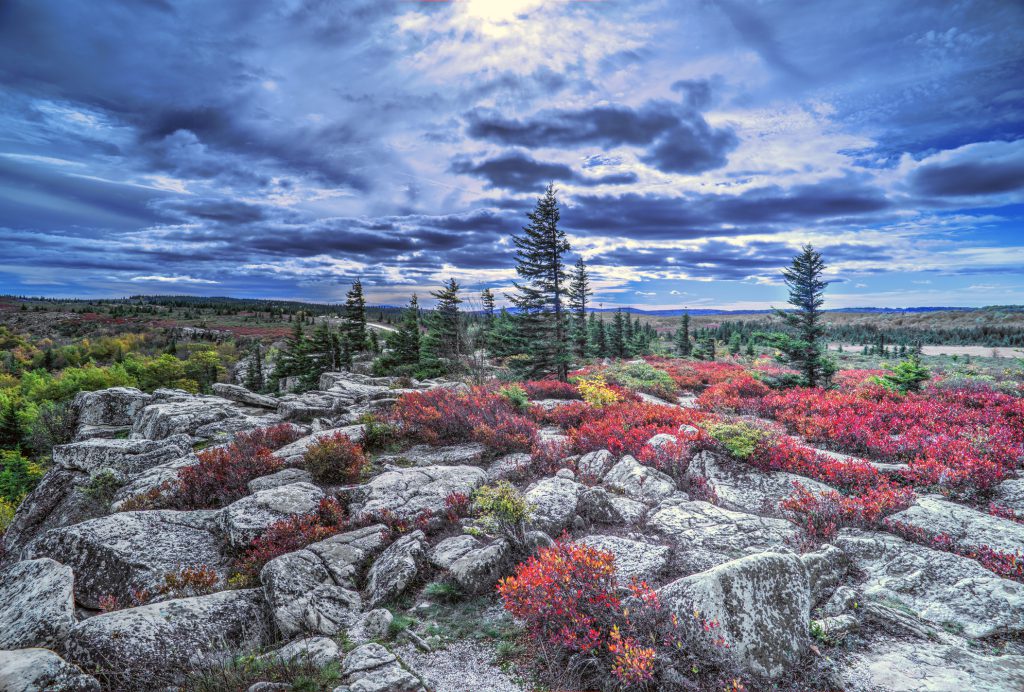 Part of the Monongahela National Forest and the National Wilderness Preservation Program… The Dolly Sods Wilderness is located in Grant, Randolph and Tucker Counties, West Virginia. The 17,371 acre forest contains quite a bit of the Red Creek drainage. It also contains bog and eco-types more commonly seen in southern Canada. Dolly Sods Wilderness has 47 miles of trails, which often lead to old railroad grades and logging roads. Trails can be muddy, though, so be ready to jump in and get your feet wet! 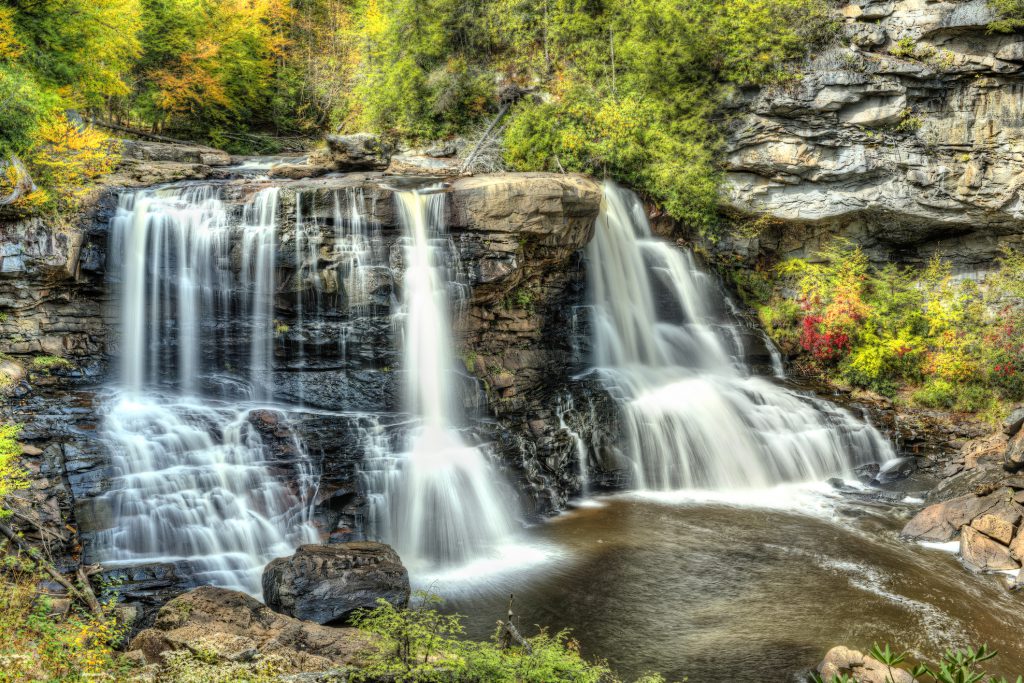 Located in the Allegheny Mountains of Tucker County, Blackwater State Park contains the amber waters of Blackwater Falls, a massive 57-foot cascading fall colored by fallen hemlock and red spruce needles. The falls are the main attraction of the state park for good reason. You can access the waterfall by steps and the many viewing platforms that allow visitors to enjoy the fall year-round. The park offers lodging and lots of outdoor recreational activities. 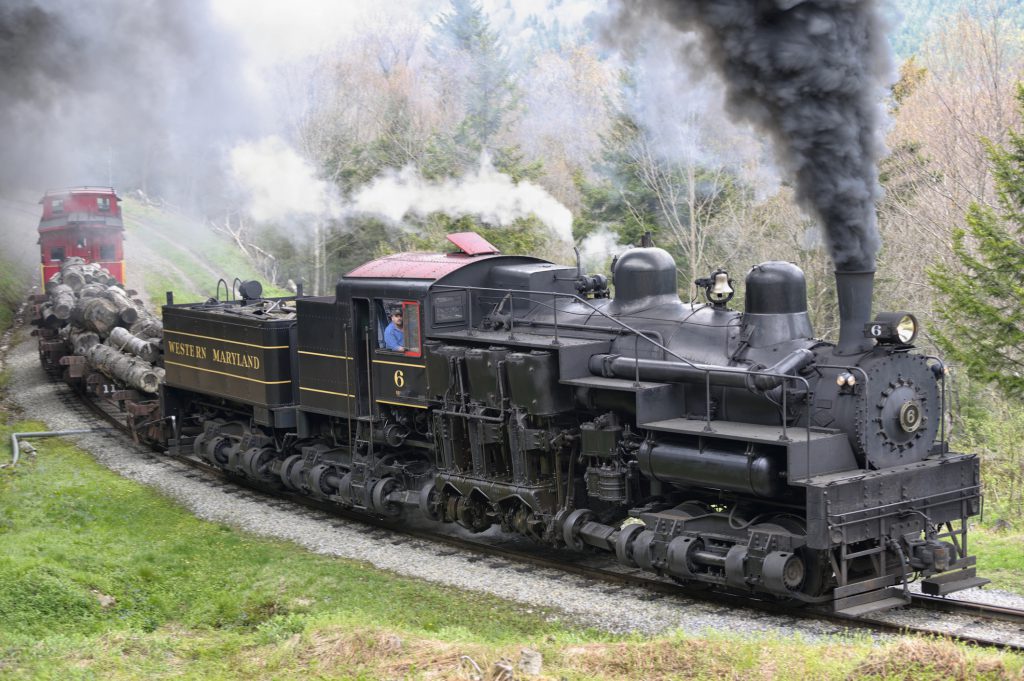 This railroad has been operating since 1901 when it was used to haul lumber and other products to and from the mill at Case. The same steam engines are still used today to transport excited passengers back and forth through Back Allegheny Mountain. Hop on in one of the 11 refurbished logging cars. Let it carry you away to the third highest point in West Virginia, Bald Knob. Once all the thick, black smoke has cleared from the locomotive stacks, you’ll see a locomotive shop that still functions today. In the town of Cass, you’ll find a mill that’s no longer in operation, but has remained essentially the same since its prime days. 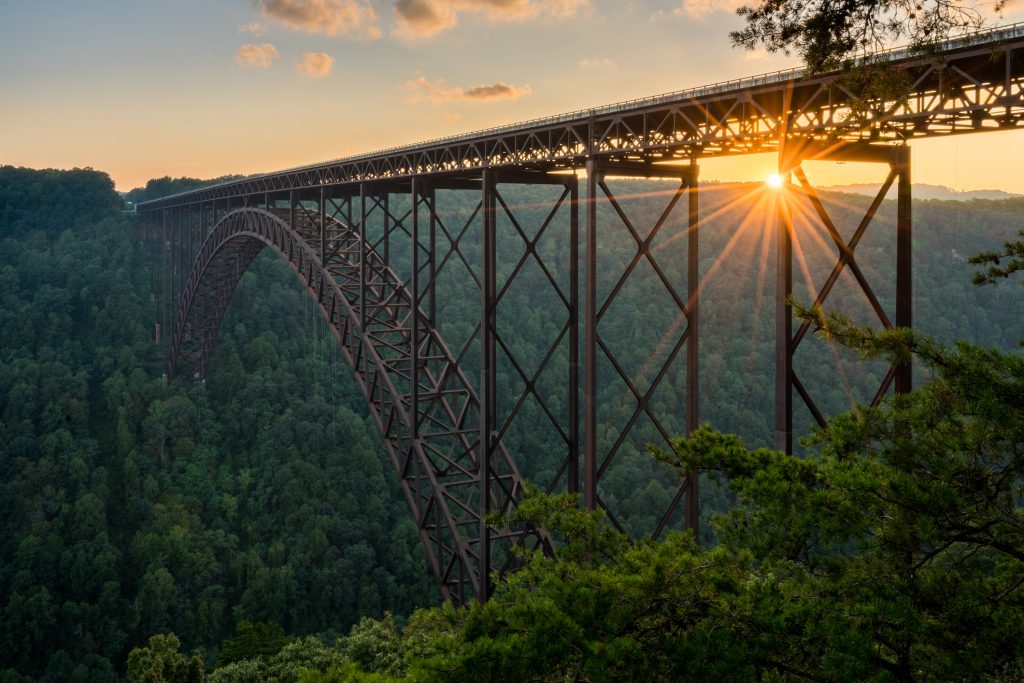 We write a lot about bridges and how breathtaking there are here on RVUSA.com, but this one is significant in that there’s only one day a year that officials will let you jump off the bridge itself. Talk about thrill-seeking!

Built in 1977 to join the hills on both sides of West Virginia’s New River Gorge… The bridge was, for a while, the world’s longest single-span arch bridge that was made of steel. This bridge is a whopping 3,030 feet long and is 876 above the water running below. It is now an annual tradition on every third Sunday in October since 1980 that the bridge becomes the only legal place to BASE jump in the National Parks Service.

The first few years that passed only included five jumpers, but has now topped at 450 because of tough rules. Tens of thousands of people come to spectate the jumpers but to also gaze over the scenery from a new view, seeing as the festival marks the only day where any kind of traffic is allowed on the bridge. “Bridge Day” doesn’t come without quite the hike, though. Nearby camping is available, but sign up quick before space runs out! 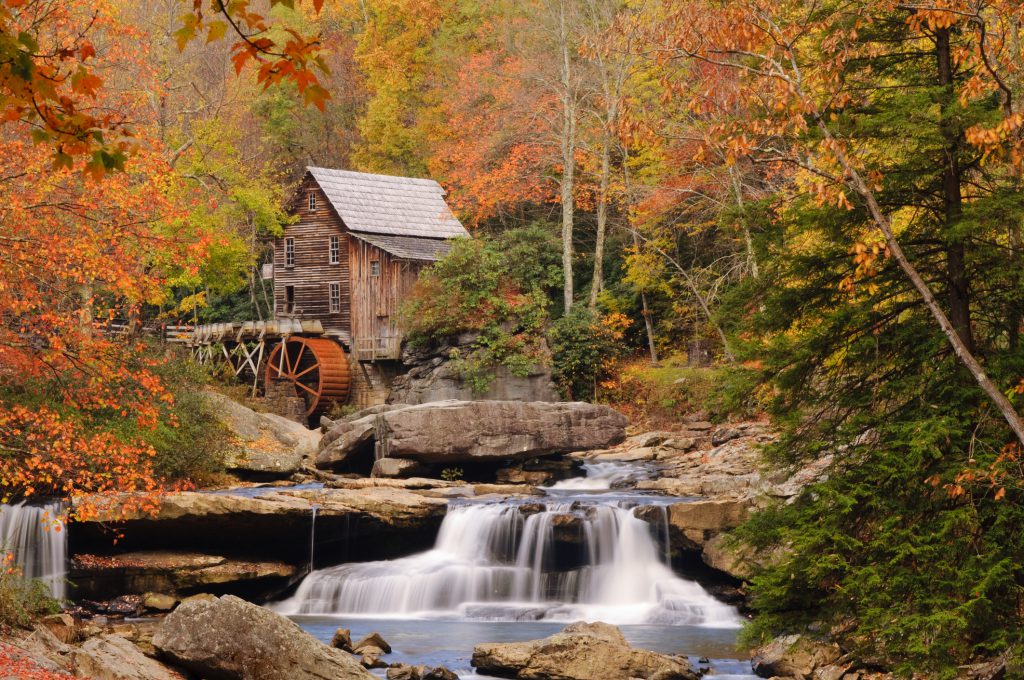 Probably one of West Virginia’s most iconic locations, Babcock State Park is covered in amazing trails and babbling streams and is 4,127 acres. Located just 20 miles south of the New River Gorge Bridge, the part is mostly known for the Glade Creek Grist Mill, a totally functional replica of the original Cooper’s Mill. There’s other attractions, too, like hiking, fishing and boating.

The state park is an incredibly popular destination for nature and landscape photographers trying to capture the beauty of the setting. Visitors are allowed the use of drones and other small unmanned aircraft, but must check in at the park office beforehand. 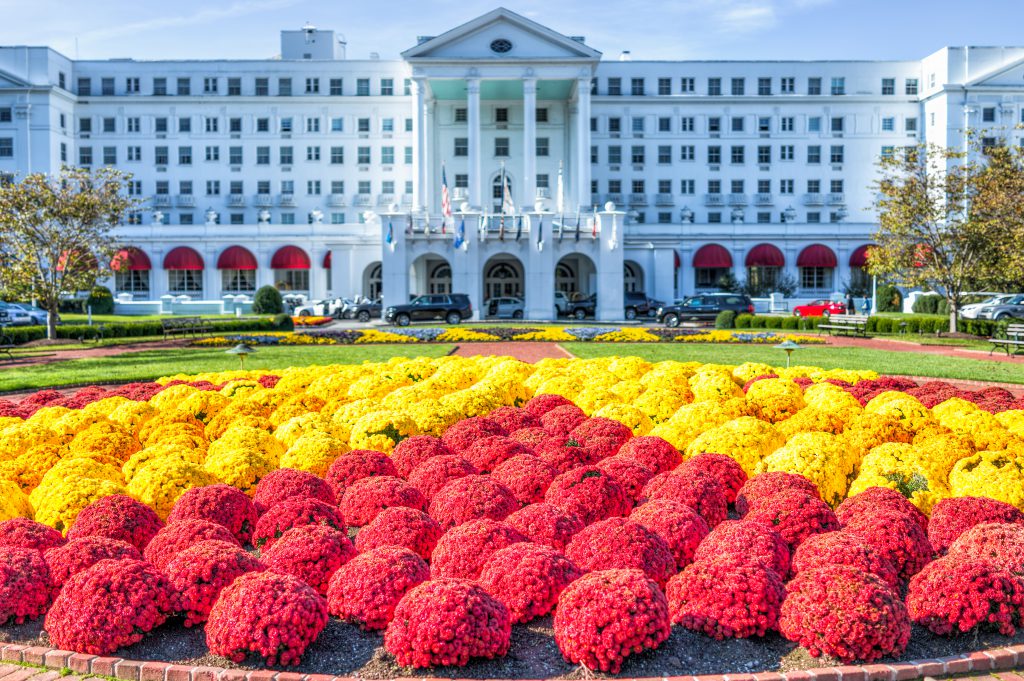 Also known as Project X, Project Casper and eventually Project Greek Island, this fallout shelter for congress was a secret until 1992. The United States government arranged a fallout shelter to be built in the mid 1950s to house all of the U.S. Congress right under the Greenbrier Resort. It wasn’t meant for Congress and their family members, who would essentially have to find shelter elsewhere. However, the secret shelter was fully equipped with bunk beds, TVs and furniture. Though the project was completed in 1958, it’s no longer in operation since its location was revealed in a Washington Post article in 1992.

Today, the housing is used by a data storage company, but at one point, it was stocked with food, furniture and entrainment like TVs and magazines. Visitors can now sign up for guided tours throughout the week. 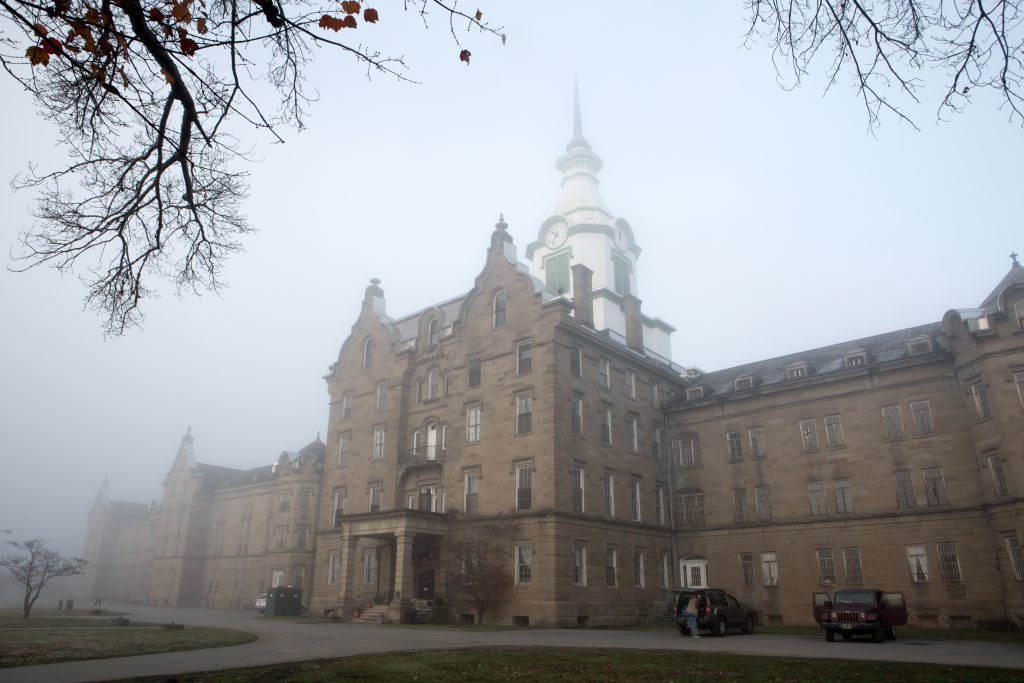 Weston, Virginia, USA – November 4, 2018. History buffs and believers in the paranormal visit the century old facility in the early morning hours. It is believed to be one of the most haunted places in the U.S.

Today, the asylum stands as proof to the inhumane practices once used in mental health hospitals across the United States. Operating from 1864 to 1994, the Trans-Allegheny Lunatic Asylum sits on a comfy 666 acres and is home to other buildings, such as a museum and the gift shop where a few of the same employees still work.

Most of the building isn’t open to the general public as those areas are in terrible shape and aren’t safe to be in. Visitors can still choose from lots of tours, though, ranging from ghost tours and even overnight stays for those truly wanting a ghostly experience. 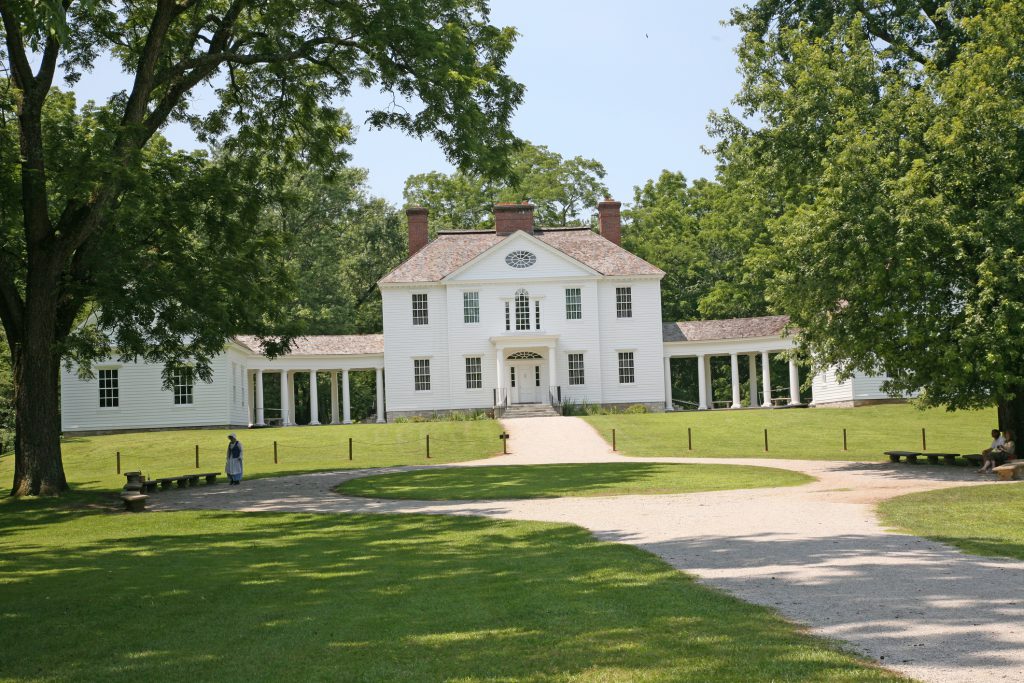 The mansion was built after Harman Bennerhassett and his wife moved to the island in 1798. They were wealthy Irish aristocrats. The mansion burnt down in 1811. Careful historical and architectural research was done and the mansion was rebuilt after 1973.

Blannerhassett Island State Park is located on an island in the Ohio River. It features a Palladian mansion and museum that attracts 40,000 people each year. To visit the park, jump on a sternwheeler riverboat on 2nd Street in Parkersburg. Once you arrive, you can enjoy tours of the grounds and mansion while riding in your own horse-drawn carriage. Tours are only offered during the months of May through October, so plan accordingly! 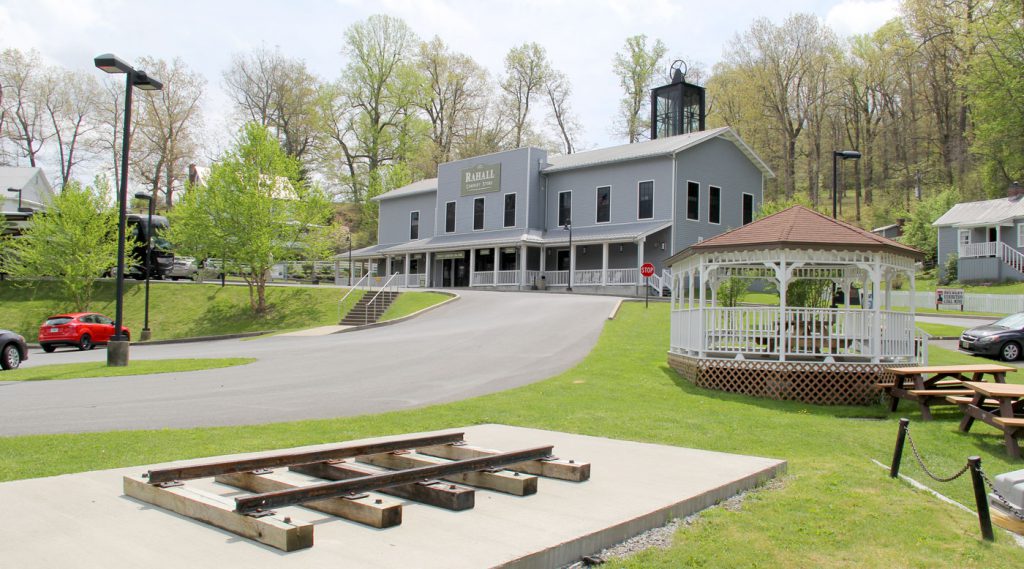 Come learn all about coal mining at the Beckley Exhibition Coal Mine! For a small fee, visitors can catch a rare glimpse inside a traditional coal mine. Tourists are able to see how the mine is built and laid out, which is more eye opening than you could ever imagine. Coal mines don’t operate the way they once did, so it’s not only a place that not many people get to see, but it’s chance to see how humans once functioned in a time that has long passed. 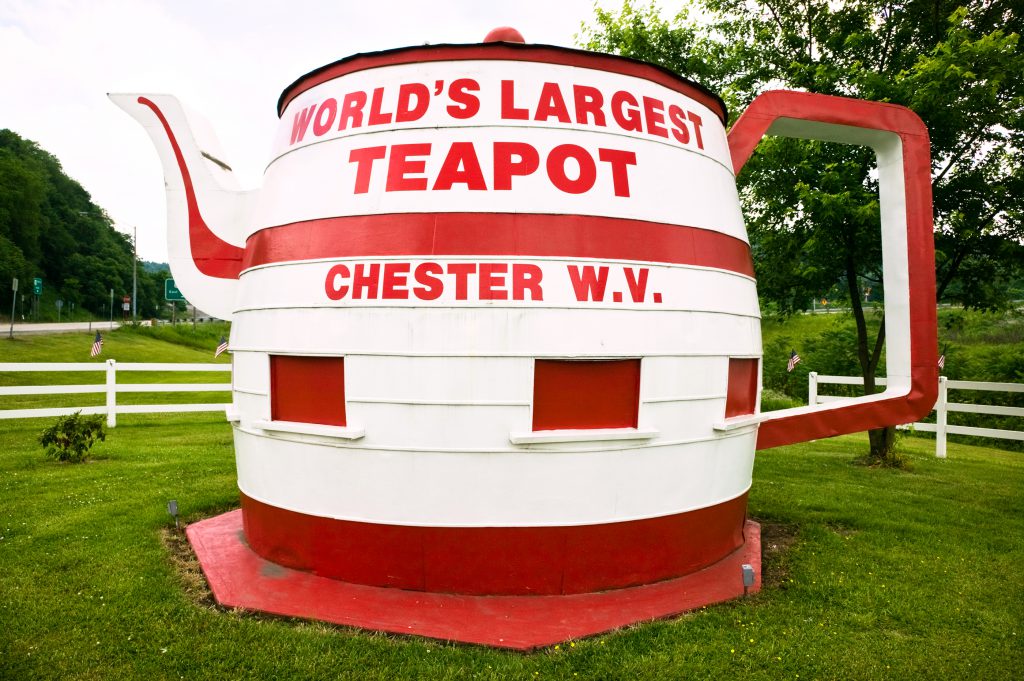 Known as the “World’s Largest Teapot,” the 14 feet high pot stands in Chester, West Virginia. It began as a simple barrel to advertise Hires Root Beer in the 1900s. In 1938, it was finally shipped to West Virginia and a spout and handle was added.

It stood outside a pottery store for several years with a concessions stand and souvenir shop set up on the inside. It went out of business in the 1980s but restored to its current place and beauty in 1990. The town of Chester continue the restorations and its first celebrated World’s Largest Teapot Day took place August 8th, 2015. the concessions opened back up for the first time in almost fifty years and a small creamer was built alongside the teapot. Maybe sugar will be next. 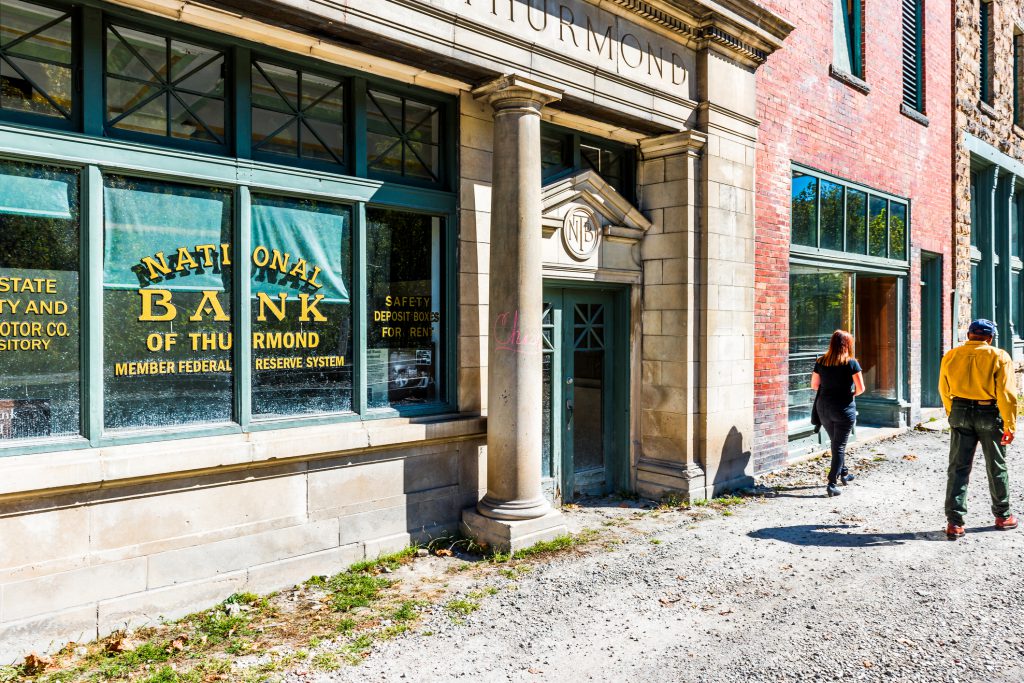 Though the town’s busiest days as a coal depot in the early 20th century didn’t stand the test of time. Its only connection to the rest of the world was a single railroad. There are a few well reserved buildings in the town of Thurmond… Like the National Bank of Thurmond and a hotel remain deserted along the main strip, which runs beside the once booming train tracks. A 2013 census tells us the population of Thurmond is 5. The place remains as alienated as it was in the 1920s. 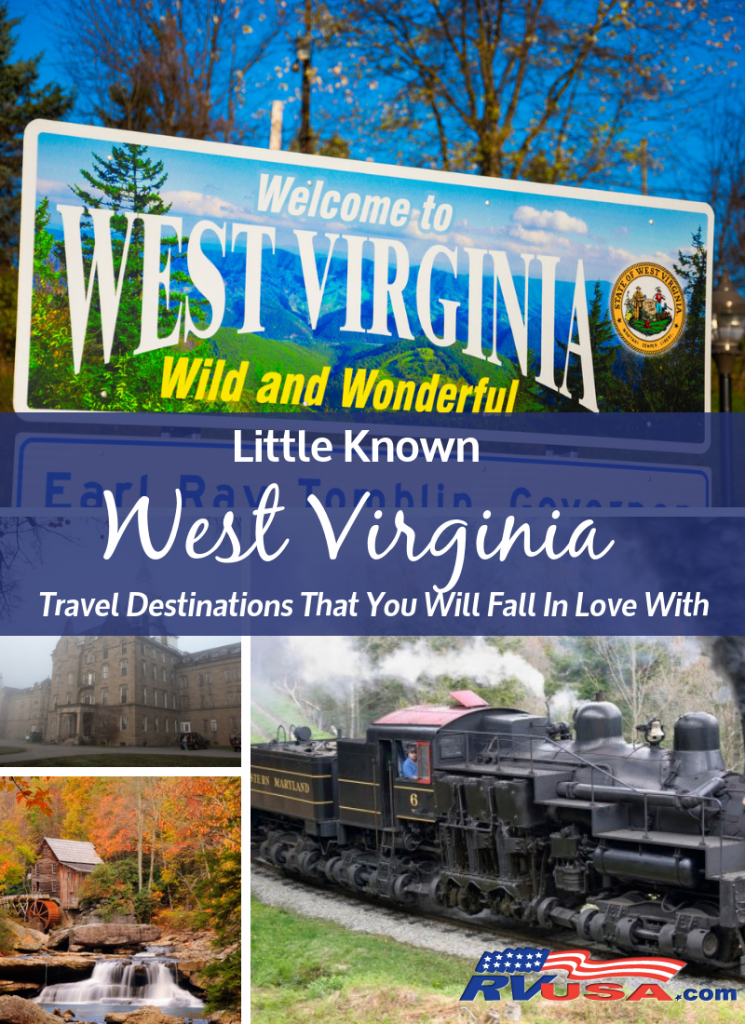