Little Known Travel Destinations in Arizona and What to Do There 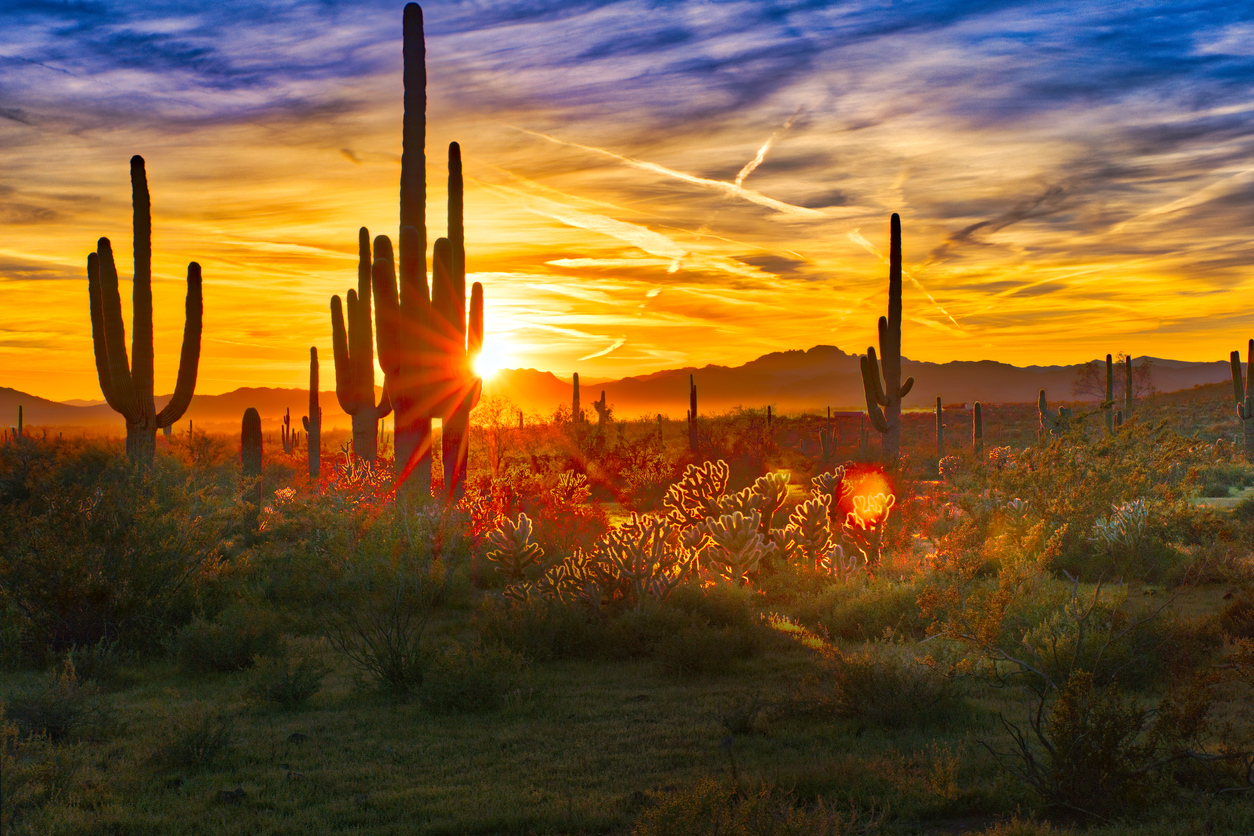 Ah, Arizona. Though the temperatures in the state are known to be rather scorching, this doesn’t stop people from touring all over the area, and for good reason! You have Route 66 which offers miles and miles of fun, a random Mystery Castle and a huge observatory for those that love the solar system or astronomy in general. Have you been to any of these off the beaten path destinations? Let us know! 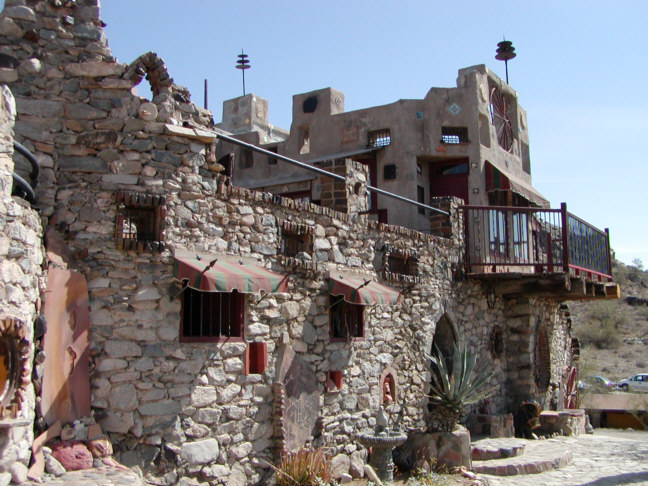 Mystery Castle was built over a 15 year span by a man named Boyce Luther Gulley. So what’s the mystery? We still don’t know what possessed Gulley to abandon his job, wife and one year old daughter to build a castle.

Gulley actually disappeared for about three years before turning up in Phoenix and starting work on his castle. It’s said to be held together by mortar, cement and goats milk, and built from other materials like stone, adobe, automobile parts and telephone poles. Though it has 18 rooms, 13 fireplaces and lots of parapets, the castle didn’t even have running water or electricity until recently. In 1945, his wife and daughter received a call from a lawyer who told them of Gulley’s death. This was the first they had heard of his death and the first they had heard anything about him. The lawyer told them the castle was theirs. The daughter, who died in 2010, lived in the castle and gave tours with her granddaughter for several years. Visitors can still tour the castle Thursday-Sunday. 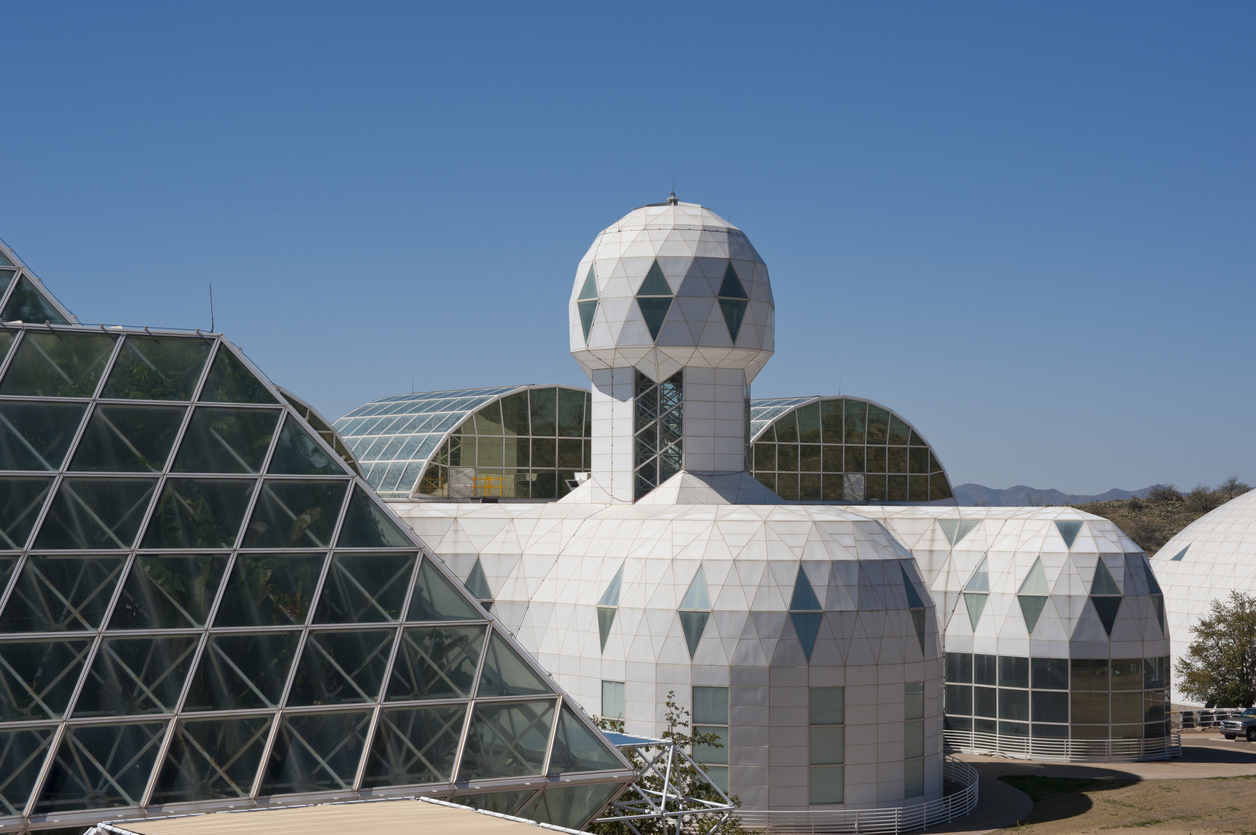 This place really could not get anymore unique! To put it simply, Biosphere 2 is a reproduction of the earth’s several biomes, but it’s so much more than that. The 3.15-acre sealed glass house is a pretty impressive attempt to fit all the earth’s conditions and environment, including a rain forest, desert, marsh and a mini ocean into one building.

It was largely unused for several years until it was bought by the University of Arizona in 2007. Now, it’s the home of lots of university experiments and educational programs. Visitors can take a tour of the biosphere and learn about the well over 3,500 species growing in the dome, as well as the experiments that continue to take place there. 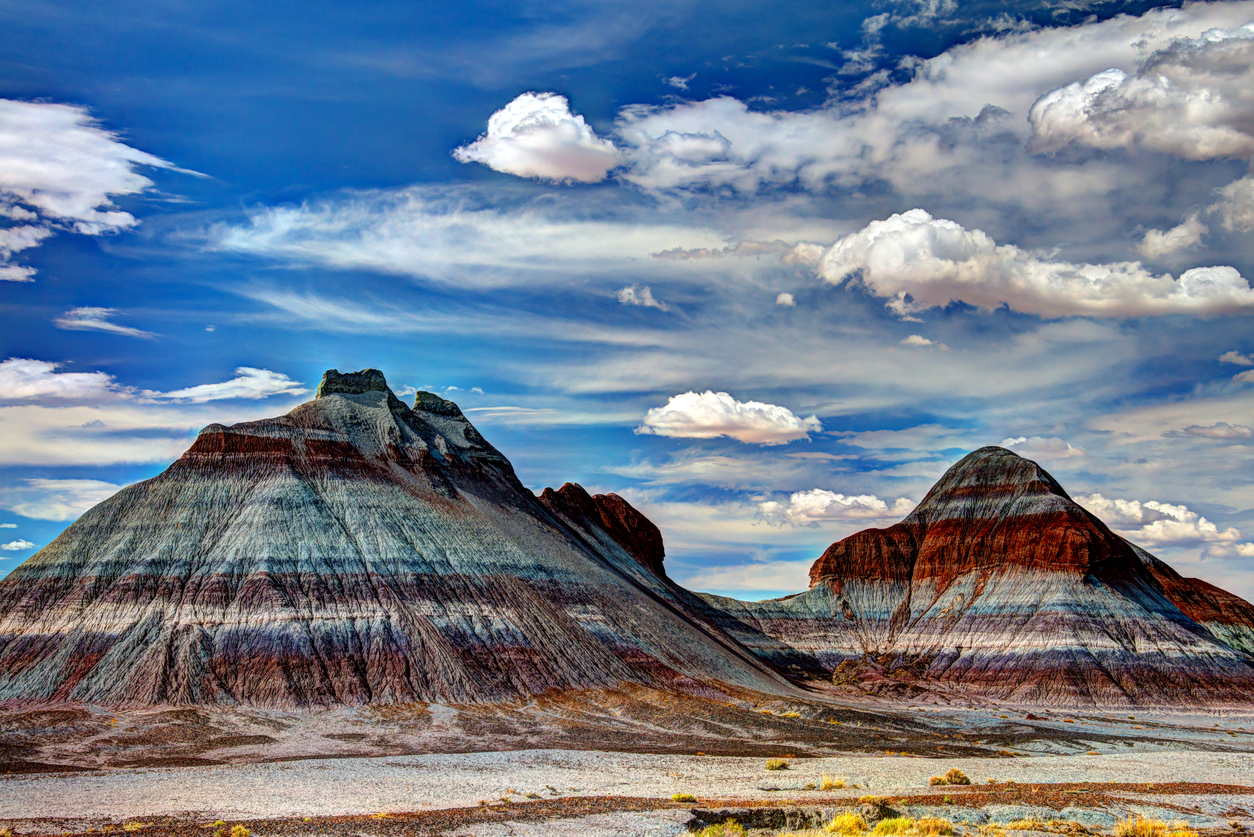 Travel to Holbrook, Arizona to discover fossils that are over 200 million years old! Right between Navajo County and Apache County in the northeastern corner of Arizona is the Petrified Forest National Park and is about 146 miles. It was declared a National Park in 1962, more than five decades after it was named a National Monument in 1906. Back during the Late Triassic Period, which was more than 225 million years ago, the areas climate was humid and sub-tropical because it was close to the equator. The forest is known for its fossils, more specifically fallen trees.

Unfortunately there aren’t any overnight spots or camping areas available in the park, but there are nearby communities that offer motels and other accommodations that visitors can use. Sightseeing options are offered for motorcycles, automobiles and hikers. The roads and parking lots are large enough to accommodate RVs like tour buses and regular motorhomes. 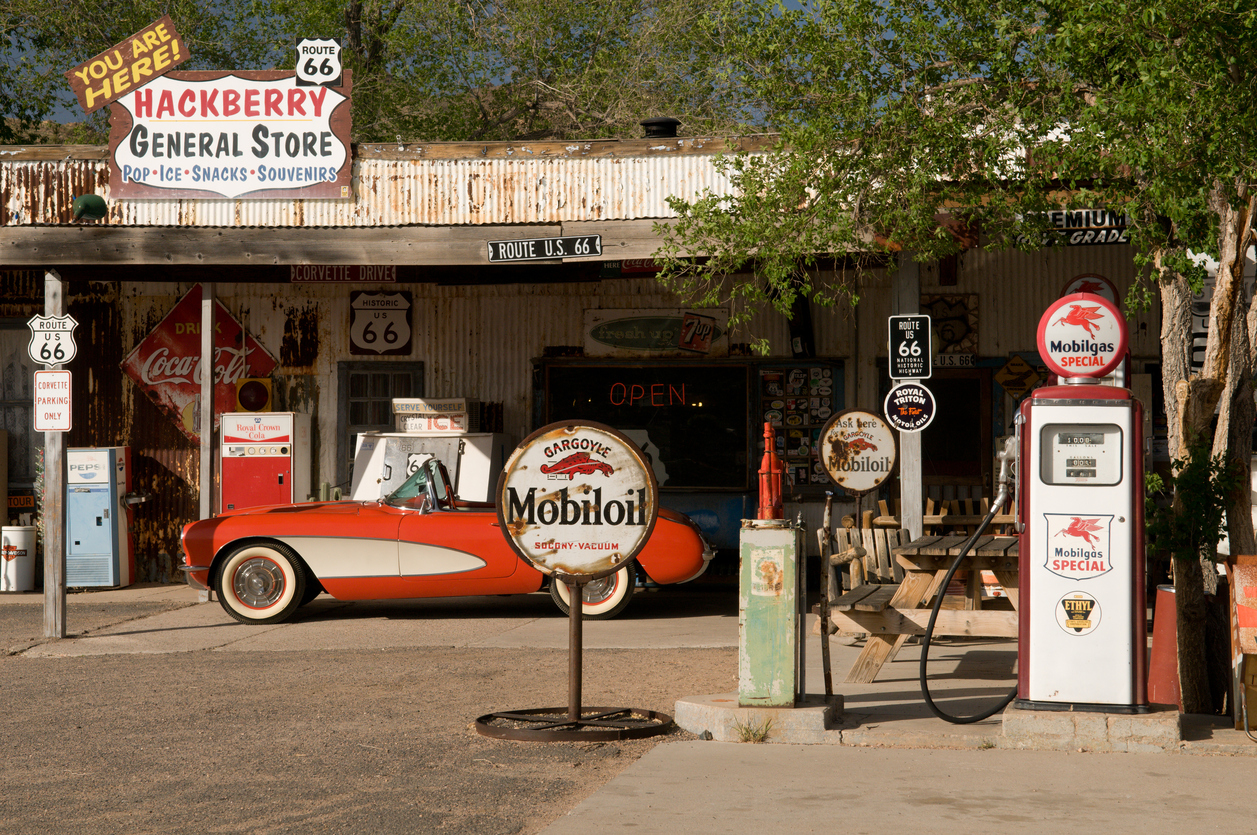 If you want to talk about hidden gems, the Hackberry General Store is most definitely worth mentioning. Located in Kingman, Arizona along Route 66, the store is bypassed by many travelers, most of the time because if you blink, you’ll miss it. The place jam packed with historic signs and artifacts. It has a root beer bar on the inside, and the outside of the store is just as unique. It sports those old-timey gas pumps, rusted Model As for the early 20th century and a red ’57 corvette was what you’ll find at the store.

In 1882, the town grew after the installation of a railroad, allowing ranchers and miners to export their products further but, the nearest place to get groceries, gas and other necessities was a full day’s drive away. Though the store only served a very small community, it was a vital resource for them.

The town almost became a ghost town in 1919 when the Silver Mine was shut down. It was revitalized later, when Route 66’s path went straight through the town. 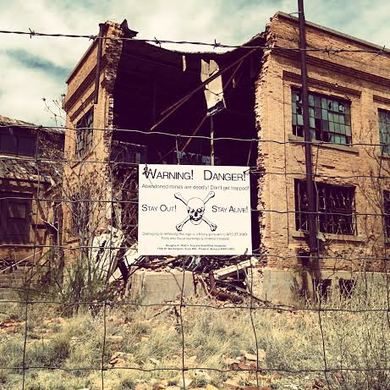 Who knew an old post office could be so creepily interesting? Known at one time as “The Largest Ghost Town in America,” Jerome, Arizona was thought to have been totally lost to abandonment. The town has recently resurfaced and is now home to about 500 people, a few preserved historic sites and an active artist community. But, the legacy of its abandonment is far from being forgotten. Not everything can be saved in the town, though.

On the outskirts is a huge post office that is slowly disintegrating into nothingness. Visitors to Jerome are there to see the historic houses and artsy areas, but they often overlook the rickety building which is not far from the town’s free parking lot. Some think this is for the best, seeing as the aging building is probably rather dangerous. Some, of course, have dared to go into the building to find old lockers, broken ceiling pieces and a wobbly staircase. It may not sound like much, but it’s more the idea behind the old post office: a community can fall behind pretty far, but it can also persevere just as easily. 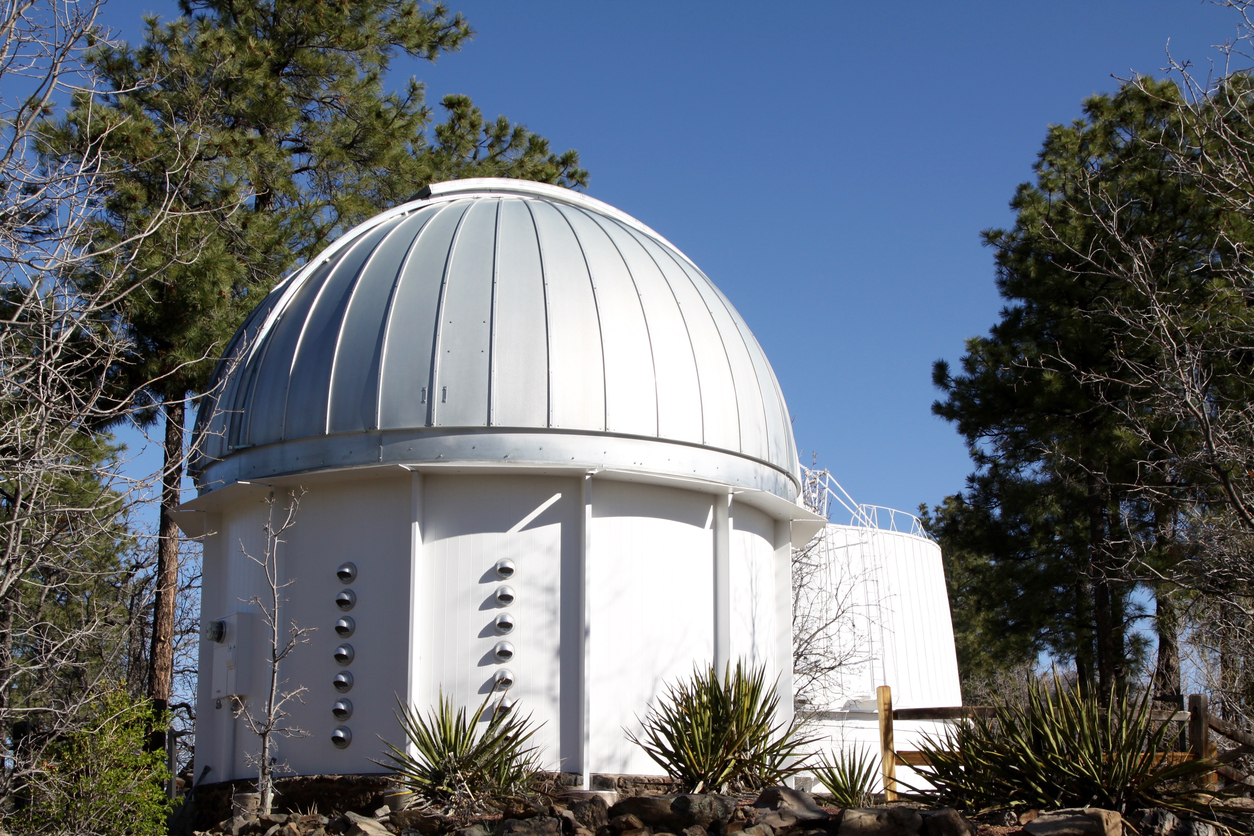 The large telescope dome of the Lowell Observatory outside Flagstaff, Arizona

Percival Lowell was an early 20th century astronomer who made the idea that Mars was home to an advanced civilization well known. In 1894, he dedicated his efforts to astronomy and used his wealth to begin an observatory in his name. His interest for life on other worlds developed after the release of two works: The Planet Mars and Its Conditions of Habitability and Life on Mars. After reading these books, he dedicated the next 15 years of his life to studying Mars at his new observatory.

The site in Flagstaff was chosen for several reasons: its high altitude (over 7,000 feet, actually), very few clouds and the distance from any city lights. He presented his findings in three books, but was still ostracized by the scientific community. Though he had several mishaps, Lowell made many contributions to the world of astronomy. He was the one that began the research that pointed to Pluto’s discovery.

As one of the oldest of its kind, the site’s history is covered with important astronomical discoveries. Lowell’s resting place is atop Mars Hill, overlooking the activities of the observatory. For visiting info, call the observatory! 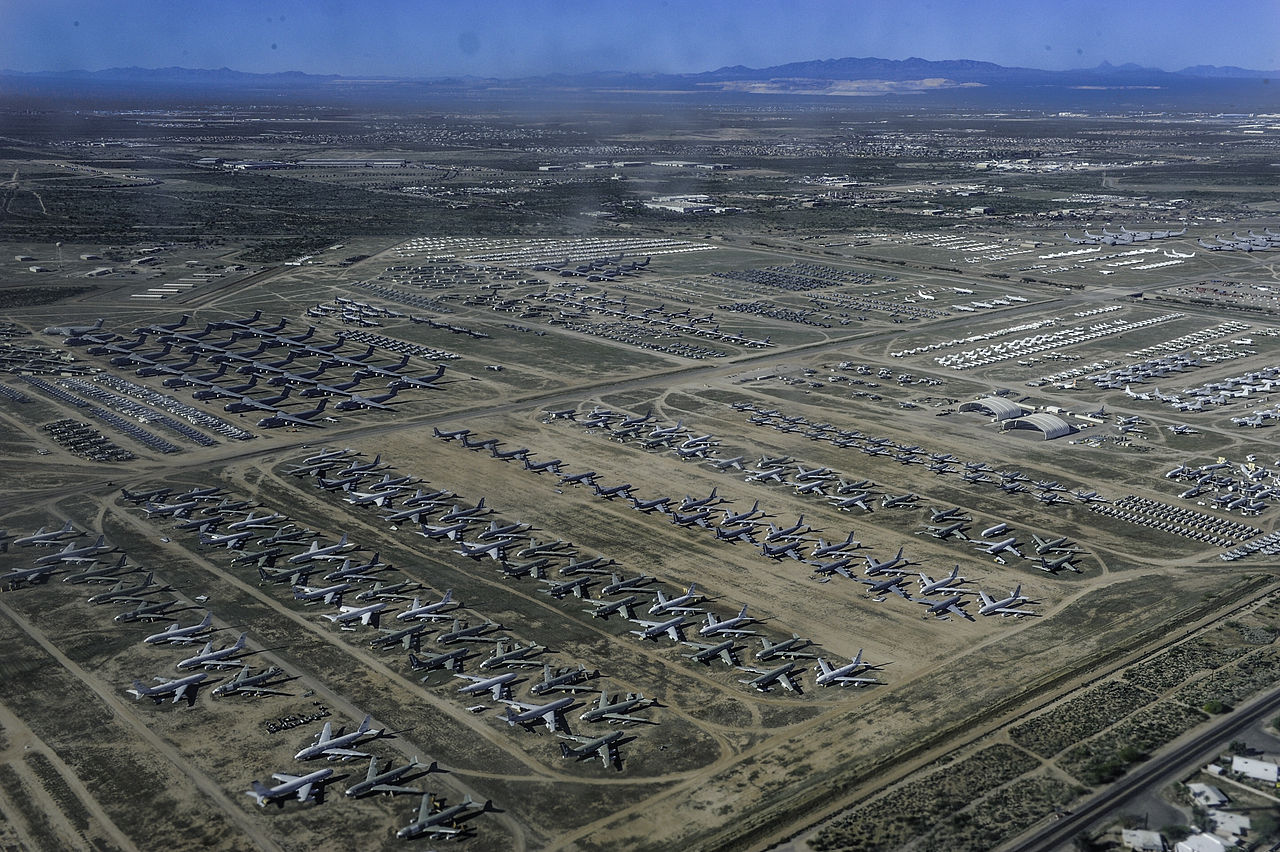 Airplane lovers say Hallelujah! This is the world’s largest military aircraft cemetery, with so many different kinds of airplanes here. The 2,600-acre lot, more popularly known as “the Boneyard,” is filled to the brim with old and retired aircraft, including almost every single kind of plane flown by the United States Armed Forces since World War ll. Right after World War ll, the B-29 and C-74 airplanes were put here so they could salvage the parts. The junkyard has been growing ever since. B-52 bombers from the Cold War are sitting right beside F-4 fighter/bombers used for the Vietnam War. The arid, high-altitude makes it a good place for such storage, as rust and other deterioration occur at a much slower pace. And because of its unique landscape, the Boneyard is often used by Hollywood to stage post-apocalyptic and action movies.

General public access isn’t permitted, but tours are offered by the Pima Air and Space Museum.